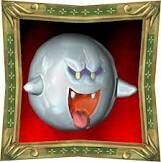 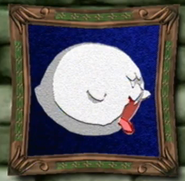 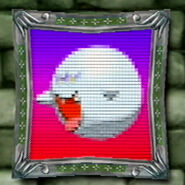 Boolossus is created by the merging of 15 Boos in Luigi's Mansion. Not only is he very frustrating to defeat, but is also the largest Boo in the History of Mario games. He only appeared in Luigi's Mansion as a boss for Area 3. A certain number of Boos captured are required to fight Boolossus.

During Area 3 in Luigi's Mansion, Luigi reaches the Balcony after sucking up ghosts in the Safari Room. As he enters the hallway leading to the Balcony, the Boo Radar begins flashing non-stop, meaning there is a very strong, yet strange signal of Boos nearby. When Luigi walks down the hallway and opens the door to the Balcony, there appears to be 15 Boos in the formation of a circle that are rotating until he approaches them. After taunting and closing in on him, they merge together and transform into Boolossus, the boss of Area 3.

In order to defeat Boolossus, Luigi needs to first have the ice element ready at hand

and lure the gigantic Boo near the frozen unicorn statues. If done correctly, Boolossus should get popped into 15 Boos by the horns, and Luigi must blast ice at each Boo he can reach to freeze them solid. He has to make haste, for the frozen Boos will unthaw, and the remaining Boos will end up merging

together once more. He repeats this process until Boolossus is no more.

Community content is available under CC-BY-SA unless otherwise noted.
Advertisement