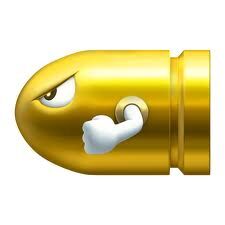 Golden Bullet Bill is a normal bullet that can be defeated by doing pretty much anything to it as long as you dont jump in front of it otherwise you will die.

Some Golden Bullet Bills is in new super mario 2 .will home in on you.

They can be pretty anoying.

Community content is available under CC-BY-SA unless otherwise noted.
Advertisement